Making a Memory into an Apron

By Heather on in Create, Family Circle

Ruby Alexander (my grandmother) was one-of-a-kind. She played the jitter bug on the piano by ear and she danced even when she was so old that all she could do was sit and flail her arms and legs to the music. I am fortunate to have her blood in my veins and her table in my diningroom.  I’ve often wondered about what that table would say if it could talk.

My Dad was born on that table in 1938. But that’s only part of the reason I think it’s cool. The table has a sunken leaf in it and on it there is something very precious — a picture of an airplane my Dad drew when he was just a few years old. His dad was an airplane mechanic and worked on military planes. 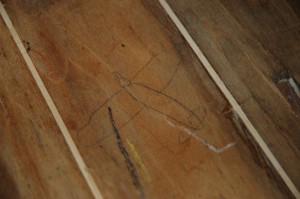 With help from really talented family members (Curtis and Jenny, I mean you), we refinished the table as well as a buffet…and then there is a hutch. I haven’t done anything with the hutch, yet. But there was something very cool inside its drawers – vintage linens. I pulled out a small red-and-white-checked table cloth, and decided to make it into aprons for my kids as a way to remember her and make something useful out of something that she once owned. (Actually, I have been meaning to do this for about three years. It took the pressure of blogging to make it happen, but I got it done). 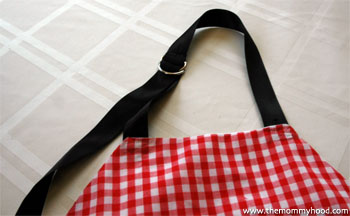 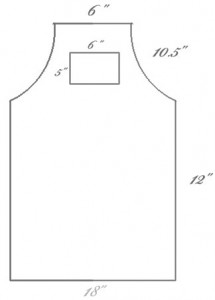 I used two-sided ribbon for the straps and D-Rings (see picture) for the clasp.

2). I made the arm holes more of a diagonal cut, but if I had it to do again, I would make them more rounded like the diagram.