By Heather on in Gift & Party Ideas, Parties

My daughter wanted a party at a bounce house, but she also wanted a Tangled theme. So I did my best to incorporate the theme into the party. I started by having my daughter draw a few pictures of Repunzel. Then I scanned one and uploaded it to VistaPrint and ordered custom invitations. 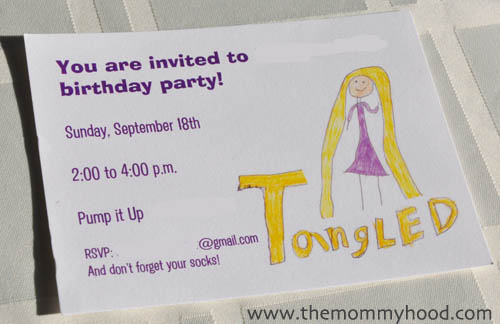 The cost with shipping was around $20. It is certainly cheaper to go to Wal-Mart and buy Tangled invitations, but I really like the way they turned out, so it was worth the 20 bucks to me.  On a budget? You could always do this on your home computer and print them on card stock.

As you may know, I am a huge fan of simple and affordable party favors in the form of boxes of M&Ms. So here’s what I came up with. 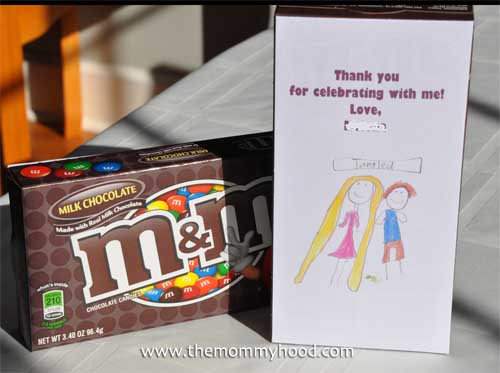 How to make these Tangled Party Favors

I took another one of my daughter’s Tangled drawings, inserted it into a Word document and then added a note of thanks above it. I set it to print two per page and my mom printed them on her color printer. (Thanks, Mom!) 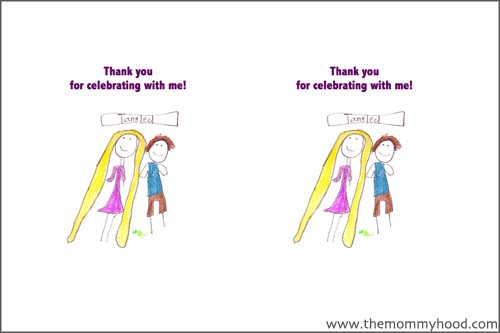 Next, I cut them out with a miniature paper slicer and used scrapbook tape to attach one paper to each box of candy. 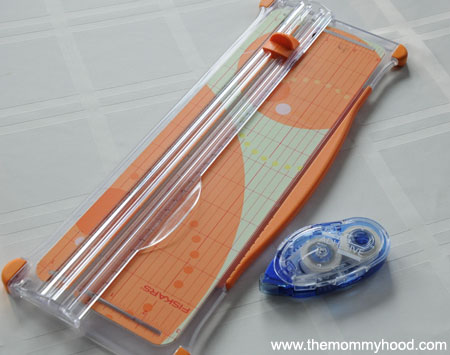 It took around 45 minutes but the only cost was that of the M&Ms – 98 cents per box at Wal-Mart. There’s just a regular sized bag of M&Ms in there, but it seems substantial to the kids. And as an added bonus, the parents aren’t cursed with a bag of useless plastic toys that will roll around in their cars until the end of time. 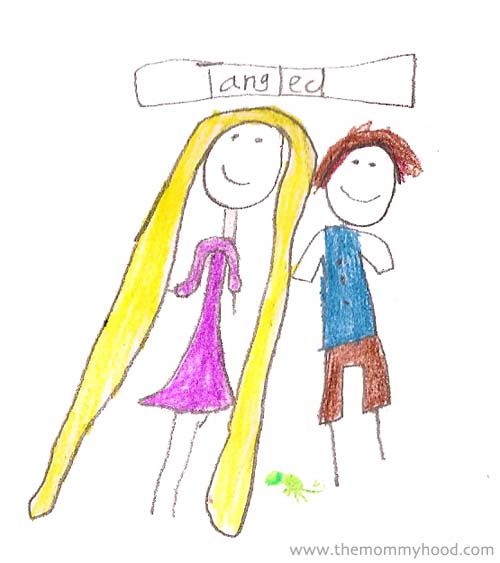 Don’t have a scanner? No problem! Use the macro setting on your digital camera to snap a picture of your child’s drawing and then upload it to your computer just as you would a regular photo. You could also get some Tangled stickers at Wal-Mart (I saw some for $1.99), and do a birthday message in a word document and add a sticker instead of a drawing to the paper you attach to the box of M&Ms.

My friend, Jennifer said you can find Chinese lanterns at the dollar store  and use them as Tangled party favors, which I thought was a good idea.  You could even attach a little note to the top of each one thanking the guest for coming to the party.

What she (my friend, Jennifer) ended up giving to each attendee was a copy of the Tangled story instead. I LOVE this idea! She got them on Amazon for a few dollars each and affixed a pretty label to each book thanking guests for coming to the party. Great idea, Jennifer!

My original plan was to make these pink and purple Tangled-inspired cake pops. You can read more about why I didn’t in the tutorial: How to Make Cake Pops. 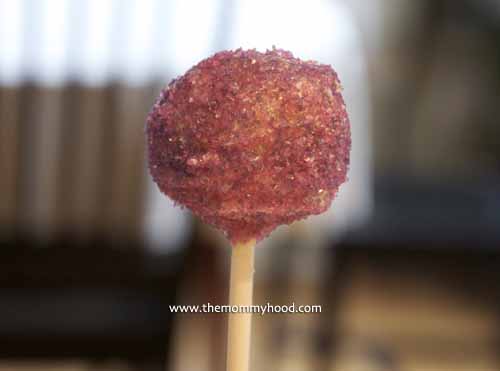 ← The Winner of the Spider Pumpkin Holder + IRONIC Coupon
Shouldn’t We All? →