What I Wish I’d Known: Other People’s Kids

By Heather on in Book, What I Wish I'd Known

What I Wish I’d Known is a series of posts about motherhood written by moms I know and admire in support of the launch of my book, Secrets of The Mommyhood: Everything I wish someone had told me about pregnancy, childbirth and having a baby.

What I Wish I’d Known: If you think children are annoying, that doesn’t mean you shouldn’t have your own (This falls into the “Embrace the fact you’re not a saint” category)

Before I had kids, I enjoyed being with kids for limited amounts of time and panicked when asked to hold a baby. I figured once I had my own, that would change and I would love them all, even the snotty jerky ones who throw sticks and tell fart jokes. But that’s just not true. The snotty jerky ones are no more charming now that I have my own. 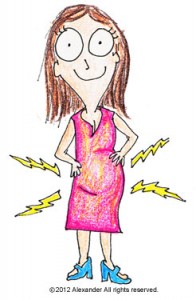 There’s a mom whose daughter goes to preschool with mine, and we don’t talk often but when we do it’s immediately honest and heartfelt. The other day, standing in the cold with preschoolers darting around and between us, she said, “I don’t necessarily like other people’s kids.”

“Yours excluded, of course,” she said.

“Likewise.” Which is true; her daughter wears cowboy boots and a skirt, every day. What’s not to like about that?

It’s good we clarified liking each other’s kids, because the flip side of this coin is that when you sense someone finds your kids annoying, they are clearly soulless, judgmental idiots.

Another airplane story, three years later: I was flying between Seattle and Baltimore with a two-year-old and a 10-month-old, and the two-year-old dropped a boiled egg on the floor a few minutes after takeoff. This made her mad — really mad — and she started screaming her blond head off, which of course set her sister off too. Two minutes of this and the guy sitting next to me stood up and yelled, seriously yelled, “My ears hurt! I have actual pain in my ears!” and demanded to be moved to a different seat.

“Wow,” I whispered to the really nice man who volunteered to take his place, “that guy is a world-class asshole.”

Heather Hopp-Bruce is a mom of three under 6. She’s works full time and also manages to do FANTASTIC drawings on her blog The Baby Sucks. Today, is her birthday. Here’s a link to her The Baby Sucks facebook page if you wanna wish her a happy birthday!

She’s my very good friend and the illustrator and editor of my book. She is all kinds of awesome in every way. Glad to know you, Heather Hopp-Bruce! 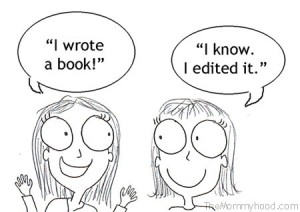 I’m okay with other people’s kids in small doses. My kids love their friends and I love them, too. (Again, in small doses.) I could never be a teacher (but admire them very much).

What I Wish I'd Known: Mother of the Bride
A Surprise Book Party!
Looking for a Pregnancy Book in Spanish? Get Secrets of the Mommyhood (en Espanol)!
← Motherhood Moments: Valentines Day Edition
The Joy of Netflix →

8 Responses to What I Wish I’d Known: Other People’s Kids