By Heather on in Fun Mommy, Stuff

Okay, so I am still off the soda.  But today I want to talk about another addition I have: I LOVE to buy inflatable water toys for my kids.

Slip’n n slides, inflatable slides, water hop scotch, you name it. I contribute to the trade imbalance one plastic inflatable at a time.

My latest score – The Caterpillar Jumbo Rider, purchased at Tuesday Morning for the bargain price of $16. 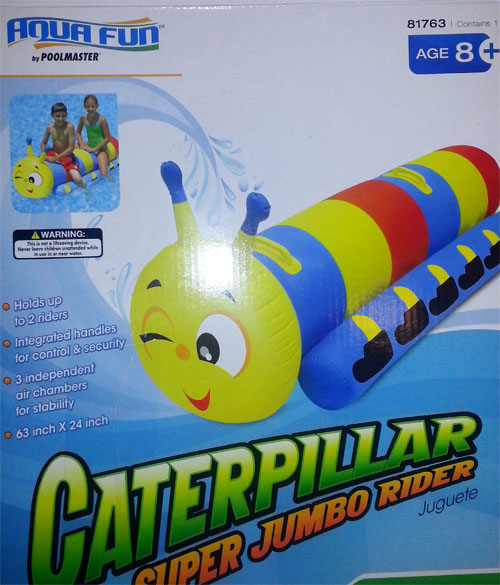 I know, I know, but I couldn’t help myself. It looks like so much fun and two kids can ride it. That is, if it ever makes it to a pool or the lake.

Last weekend it rained and the kids decided to blow it up. I was sitting on the couch downstairs when they came out with it above their heads moving it up and down saying it was a Chinese Dragon.

Last night Molly tried to sleep on it. She eventually graduated to trying to use it as a pillow, which didn’t last long.

This reminds me of Charlie trying to sleep on his bed in the tunnel. I don’t have a picture of him in there, but it’s this thing. On a twin bed. He had a pillow and books in there.

Anyone want to take bets on whether or not the super jumbo rider ever makes it to water?

We're Off To See the...Cool Wizard of Oz Book
Hooked on My Key Chain
Dishwasher Appreciation
← Don’t Carry a Purse? You Might Be Interested in This…
What I Wish I’d Known: Professional Organizer Karen Sprinkle (Part II) →