How to Make a Ghost Costume (Lessons Learned)

By Heather on in Halloween

Why, WHY can’t it just be easy?

My son, Charlie, has no interest in superheroes or movie characters. So when it comes to finding a Halloween costume for him, I am often put in the position of making rather than buying something. (It sure was a lot easier when he was really little and would just wear whatever I put him in!)

One year, he wanted to be a snowman for Halloween. So, I had to figure out how to make a snowman costume and in doing so I nearly LOST it.

So, one year, he wanted to be a ghost. Easy, peasy, right? Mmmm, not really. I sacrificed a sheet, placed it over his head and tried to get him to be still while I cut around the base of it. You can cut the eye-holes first, but if you do and you don’t place them well, you are screwed.  The sheet was WAY too much fabric. He ended up trick-or-treating in his regular clothes and it was funny to watch people at doors try to guess what he was. Fortunately, he’s super cute so he totally got away with it.

In the end I wish I hadn’t ruined a sheet – or at least, I wish I had bought an el cheapo one and cut that up. (But, of course I waited until the last minute).

Last year, Charlie wanted to be a ghost again. And I had a geeeeeenius idea. Instead of buying a sheet, I got a round table cloth. It was PERFECT! It wasn’t too much fabric and it was hemmed around the bottom. Unfortunately, I didn’t cut the eye-holes big enough. Live and learn. Poor kid, it’s kind of hard to run around at dusk when you can’t see. 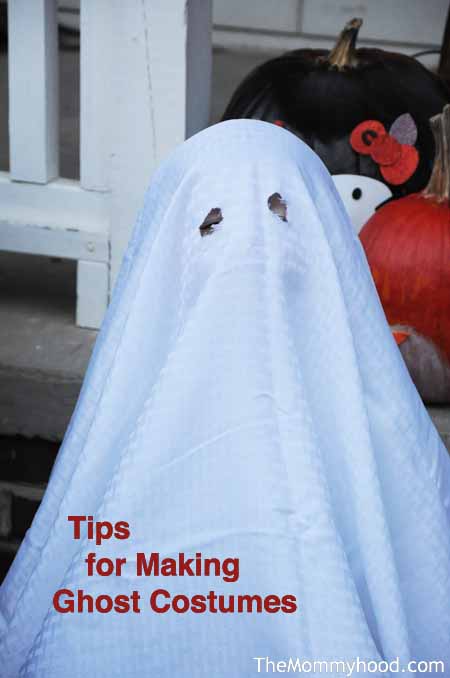 Fortunately, I had my Billy Bad Ass and was able to fix it on the spot.

Another thing that helps is to create sleeves so they can carry their candy holder. I used two or three safety pins under each arm, and left enough room for him to be able to take it off – which he did. Ghost costumes that cover your head are annoying to wear.

If he wants to do this again, I think next time I might just cut a big hole for his head and pin the arms. That way, he might actually wear it. Although, I will have to make sure and ask him first, because once I cut it, there’s no going back.

Hope this was helpful. If you have any ghost costume making tips, please share them in the comments below. I may end up making yet another ghost costume at some point.

Although, this year, he is saying he wants to be – get this – a bottle of shampoo!  (This makes me snort laugh.) NO idea how I am going to pull that off, so I sure hope he changes his mind. Send prayers. And vodka.

UPDATE: Oh it got worse before it got better: Choosing a Halloween Costume. Daily.

6 Responses to How to Make a Ghost Costume (Lessons Learned)