By Heather on in Just for Fun 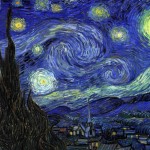 It was a beautiful weekend here in East Tennessee with lots of much needed outdoor time. This afternoon, I was sitting in the kitchen when I saw a massive sleeping bag wad with two little Charlie legs sticking out of the bottom run through the kitchen toward the garage door.

“Uh, where are you going with that, Buddy?”

I heard a muffled-by-pile-of-blankets-on-his-head, “Trampoline!”

A few minutes later, he rushed back in and then back out again with another armful, saying that NEXT he was getting pillows.

I drew the line at pillows.

At dinner, the kids were checking the windows to see if it was dark enough.

And we did. After dinner we all trudged out there and climbed into the blankets waiting for us in the now dark trampoline.

It was chilly, crisp, and the four of us snuggled waiting for the trampoline to settle so we could focus. We laid there watching stars and planes and soft gray clouds drift across the night sky.

It’s a school night, so after about 10 minutes we went inside – and it was not without protest.

“In the spring, we will come out here one night and camp” my husband promised.

Campoline, we are calling it! They’re already looking forward to it.

You know that life with kids is good when you see the stars you’d otherwise miss.