What I Wish I’d Known Fatherhood Edition: 10 Things I Have Learned

By Heather on in Father's Day, Humor, What I Wish I'd Known

What I wish I’d Known is a series of posts about motherhood written by moms I admire in support of the launch of my book, Secrets of The Mommyhood: Everything I wish someone had told me about pregnancy, childbirth and having a baby. But Father’s Day is coming and I thought it would be fun to do the series from a Dad’s perspective.

10 Things I Have Learned about Fatherhood 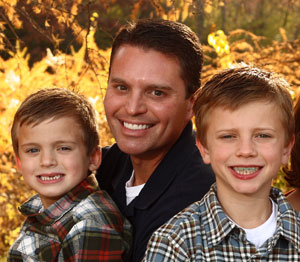 First things first. Yes, I love my sons (9 and 7 years old) an amount that I can’t express in words and they, along with my wife, are the greatest things that have ever happened to me. I wouldn’t change a thing.

That said…there are a few things that I just – shall we say – wasn’t prepared for when I decided to give this fatherhood thing a try, such as:

1. You can’t get a word in edgewise. When I lifted him up in the delivery room to announce his name to the medical staff (I had not seen the “Lion King,” so I wasn’t copying) I had gotten to the first syllable of his middle name and he interrupted me. I said, “You can’t even let me get one sentence out without interrupting me!” Well, that would set the stage. 10 years later, it’s still true. If I need to have a serious conversation with my wife (job, family, health, etc.), I wait until the kids have gone to bed so I know we won’t be interrupted. Of course, by this time of the day, we’re both so tired that we end up falling asleep without talking.

2. Your time is not your own. Get used to it. Both my boys play baseball so 5 nights a week, on average, is spent with us tag-teaming and making sure we have representation at each contest. My wife and I were seeing each other so rarely that we had lunch together today during the business day. As I dropped her off at her company after our lunch she said, with surprise, “Did you get a haircut?” “Yes,” I said. “16 days ago.”

3. They hear everything you say. Everything. Even when you don’t actually say it. When we got an unexpected bill in the mail, I opened it in our foyer and *under my breath* mouthed an expletive. Unbeknownst to me, my son was sitting at the top of the steps, read my lips, and said, “Awwwww Dadddddy…you said a bad word!” So, I gave up vulgarity/profanity/obscenities, etc. for Lent. Here’s what I found out: I curse a lot.

4. Related to that, you *must* take time to spend with your spouse. It will not become uncommon to pick up the phone, call our #1 babysitter and say, “Hey, do you have plans on the second Saturday of the month…3 months from now?” It sounds cliché, but the time away from your kids will not only increase the bond with your spouse, it will make you appreciate your kids more.

5. My kids are annoying. But not nearly as annoying as your kids. I’m sorry, but it’s just the truth. You may substitute loud, messy, and any other cadre of negative words for annoying.

6. Your kids are smart. But mine are smarter. I’m sorry, but it’s just the truth. You may substitute better-looking, funnier and any other cadre of positive words for smarter.

7. You will eat your words. About lots of things. Before I was married, I would scoff when parents said they cut the crust off their kids’ bread. Guess what I still do?

9. Kids have no grasp of the “Oh, we turn the clocks back so we can sleep an extra hour tonight” concept.

10. It is possible to feel your heart break when your child  a.) Gets hurt (physically or emotionally) ; b) Loses a close game  c); Is sick;  and/or, d) Suffers any manner of negative circumstances.  Nobody said this would be easy!

In any event, I wish you a Happy Father’s Day. Tell the wife and kid(s) that Adam says to let Dad control the remote (or music selection) tonight. But just tonight – let’s not get ridiculous.

Adam is the father of two, who still can’t believe that there are people that look to him for life’s answers. Because he has none.

I know Adam through his wife who is equally awesome and all kinds of funny too. These are the people you want to sit next to at a dinner party. Thanks for doing this, Adam. I LOVE it!

Other Posts on Father’s Day: 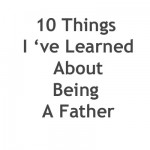 The YMCA Flash Mob in My Mind
Adventures in Attic Insulation
In a Fog? Sometimes Motherhood Means No Sleep
← Two Father’s Day Gift-Giving Tips
On Being a Father (Written By My Dad) →

4 Responses to What I Wish I’d Known Fatherhood Edition: 10 Things I Have Learned