By Heather on in Being a Mom, Sanity

For some moms (ahem, me) summer with kids can produce unusual mothering outcomes.

The last two months have been nutty. My husband travels so I’ve been exposed to a few EXTRA helpings of quality time with my beloved children (and not enough cookies) so I am starting to feel the effects.

In fact, both kids were scheduled to attend their first camp this week, which was supposed to provide (a great thing for them to do AND) a much-needed break for me.

Camp started on Monday at 8:00 am. My son had a months-ago scheduled well visit for Monday at 9:20. You can’t monkey with that, and I had to drop Molly off anyway, so I dropped them both off and trotted off to the only place open nearby where I could conveniently kill some time – Target.

I was so freaking happy to be by myself that on my way out, I saw a red shirt employee taking a picture of three other Target employees…and I totally photo-bombed it without breaking my stride. They laughed, I laughed and I waived walking backwards before turning around and heading out the door.

Happiness = Target. ALL. BY. YOURSELF!

The well-visit. Ahh, seven. There were no dreaded shots, so that made this event much easier to endure. We are sitting there. Charlie in his fruit of the looms with his legs crossed continuing his story with “So, as I was saying…”

Later, he noticed the little square light on the wall in the patient room. Here’s how that went:

Me: “It’s probably to used to call for help.”

Charlie: “Like if a bunch of cicadas came and attacked you?”

Talking to the Doctor

Charlie is minus his two front teeth and he is very much a 40-year-old man in a little kid’s body. Our doctor chatted him up. Through this conversation I learned he hadn’t had breakfast. (Mom of the year!) She seemed to really enjoy talking to him and asked him multiple times if he had any concerns or if anything hurt. Did he say anything? Nope.

By the end of that day it was apparent my boy had pink eye.

Pretty sure we picked that up from the chick fil a play area last Friday. “4-count nuggets…my pleasure! Would you like some pink eye with that?!”

So, having kids means you have a stockpile of various medicines.

Fortunately, I had some left over pink eye drops that had Molly’s name on them. They were expired, so I called my Dad, a pharmacist, to make sure it was okay. He green-lighted me.

I put them in his eyes at bedtime and he started screaming – “It burns, it burns!” And I was all OMG! I just blinded my son with old eye drops! And I put it in BOTH eyes instead of just the one pink eye! Why couldn’t I have just blinded him in ONE eye!

He was fine, just being dramatic.

His eye was better the next morning, but we went to the doctor anyway for new drops (just in case) and he stayed home from camp.

Eye Drops are NOT a Party

I knew he would fight me on the new drops and I had to change all his bedding anyway, so I put a nice warm blanket on the bed and said – “Ooooh warm blanket, let me wrap you up in it!”

I did and he was all smiley until I sat on him in his makeshift straight jacket and administered eye drops against his well.

Afterwards I told him he couldn’t get out of his bed. He slept.

I sat by myself on the couch with posttraumatic parenting disorder, composing my mother-of-the-year-entry and wishing the vodka fairy would stop by with an IV.

It’s been forever since I have had some girl time and an adult beverage. Margaritas, anyone? 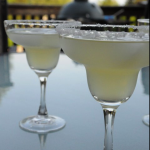 The Running of the Moms: Tips for Buying and Selling at Consignment
Why I Love Dolly Parton
Toys You Should Buy for People You Secretly Hate
← Little Kids: Little Problems
Great Conversations With Kids: The Snackeez →

4 Responses to And God Bless…Summer Camp!