Once Around: Roller-Skating Then and Now

By Heather on in Fun Mommy, Humor

It’s Spring Break and my husband took the afternoon off so we could do something as a family. We went roller-skating. Molly is 6 and Charlie is 3.

It’s been decades since I’ve been skating, but two steps into the rink and it all came back to me. I remember being extra aware of teenage boys in parachute pants who would flip their skater bangs artfully while gliding around a disco-lit floor to You Dropped a Bomb on Me.

A lot has changed at the ole roller rink, but many things have stayed the same. Here are some observations from our skating adventure:

#1 – Stop! The roller rink is located at the corner of Madonna and Broadway. Where else would it be? (And it’s a dead end.) 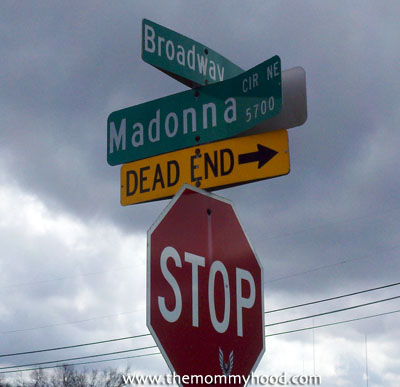 #2 – I always thought the roller rink was huge, but now that I am grown, it looks pretty small.

#3 – Once you complete a lap in roller-skates holding up a six-year-old who skates like Bambi on the icy pond, the rink doesn’t feel so small after all.

#5 – It quickly seemed like a good idea to just wear sneakers and go out there and help my daughter skate.

#6 – It hurts like hell when a six-year-old runs over your sneaker with her brick-on-wheels roller skate.

#7 – Three is too young to learn to skate. Charlie put absolutely no effort into trying to stay on his feet, so attempting to hold him upright was not fun.  I learned after the fact that they have toddler skates that kids can wear over their shoes. These would have been ideal, because they don’t really even roll. 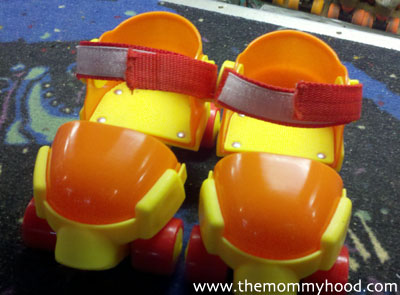 AND these skates even look like Big Bird’s. I totally could have sold him on these had I known about them up front. 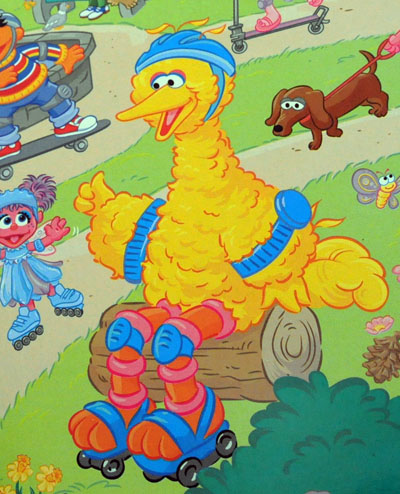 #8 -  People fall down a lot.  And that’s funny. As long as it’s not you or your kid, and no one gets hurt. I have to say, the resounding thud bodies and skates make when they go down at the skating rink is very distinct.

At one point, I tried to take a picture of my husband and Molly skating (Charlie was wearing sneakers by this point). I counted to three, and on cue instead of smiling they fell down. Ouch. But at least I got a blury picture of it. Yes, that pink blur under Bert is poor Molly. And Charlie is clearly perplexed. 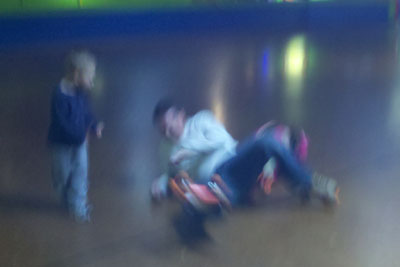 #9 – And then there are the kids that can only get around the rink by holding onto the wall the whole time. Germaphobe that I am, all I could think of when I looked at that wall was microbiology. I imagined myself in a lab coat examining a swab of the handrail with my laser mom-eyes, instantly deducing, “Hmmmm. Fecal matter.”

#10 – And what better to follow fecal matter than rink food. Charlie, lover of all things edible, was awe struck by the snack bar. I took this picture and he turned to me and said, “Mom, you know another way to ‘say cheese’ is cheeseburger.” 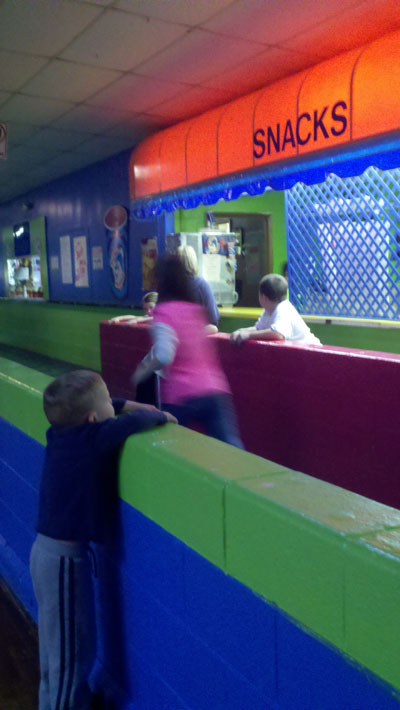 #11 – They still have races. When the races began, my husband turned to me like he was Clint Eastwood and said, “If they have my age group…I’m goin’ in.”  But when the time came, there were no takers and despite our prodding he refused to be the lone loser parent who went out there. Too bad, it would have been really funny, and I had my camera.

#12 – Instead of New Edition they played Beiber. But I did hear one Michael Jackson song, which was oddly comforting.

#13 – The roller rink is still the ideal setting for cheesy teenage happenings. I watched two girls (wearing the same leopard shirt) skating round the rink, returning only once in a while to two guys who were either too cool or not coordinated enough to skate.

#14 – And this is the weirdest thing of all…parachute pants have been replaced by – wait for it – STROBE-light pacifiers on lanyards. WHAT? Yeah, I’m not kidding. 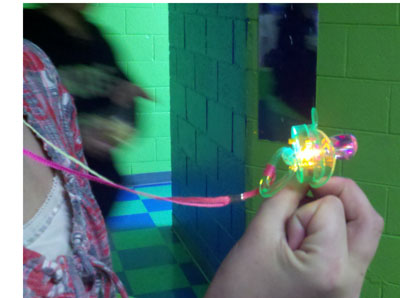 It was really weird to see tweens with pacifiers at all – let alone in the form of flashing lights in their pie holes.

The best part about it, was when it was over and we went to a nearby restaurant and got dessert. We’d earned it.

What do you remember about skating rinks?

← Kindergarten This Year or Next?
The World’s Largest Slinky →

3 Responses to Once Around: Roller-Skating Then and Now

Leave a Reply to Heather Click here to cancel reply.