How To Keep Deli Meat Fresher

By Heather on in Chef Mommy, Food Tips, tips and solutions 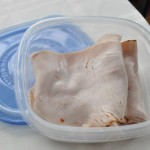 I know deli meats probably aren’t the healthiest thing in the world, but its something my kids will eat in their lunches, so I buy it all the time. And, personally, I’m a fan of the sandwich.  I like Boar’s Head from Kroger and am pretty much so spoiled by it that anything else just doesn’t cut it.

Speaking of spoiled, my sister was at her grocery store the other day (Publix) and learned something from the lady at the deli counter. Deli meat will last longer if you take it out of the bag and put it in a sealed container. Totally makes sense, but I just never thought about it. So word to the wise, People.

And, by the way, five days seems to be the consensus online on how long it lasts in the refrigerator.

Do You Have Pine Needles in Your Hair?
Babies With E-mail Addresses...Wha?
Father's Day Gift Idea #2

← I Guess So
Lots of Love at the Special Olympics →

2 Responses to How To Keep Deli Meat Fresher