The Bus Freaks Me Out

By Heather on in Being a Mom 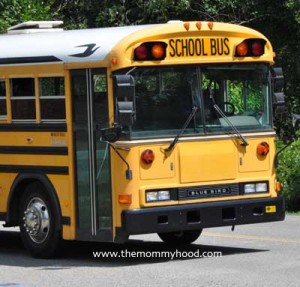 Do you guys put your kids on the bus? There’s a crazy pick up line at school, so I put my daughter on the bus last year. But instead of having her ride to our neighborhood, I had her ride to my friend’s neighborhood and I picked her up there. I’m sure that’s probably against some rules, but my friend’s son was the only other kid at the stop, and no one cared.

I just felt better about her having a friend on the bus and also it was just a 5-minute ride, the second stop. Towards the end of last year our friends moved and I continued to stay the course for fear changing it mid year might mean my daughter would forget and not be where she was supposed to be.

So now it’s a new school year and if she rides to our neighborhood, it’s a 16 minute ride. She’s 6, almost 7, and totally wants to ride the bus. But I don’t want her to be exposed to older elementary school kids, unsupervised every day for all that time. If I pick her up at school, she’s in the gym with a bunch of kids for potentially an hour, but at least that’s supervised. And while she waits that hour, I wait that hour in line with Charlie, burning gas and time. Not that I have anywhere to be, but this is just one of those lesser of evils kind of situations.

I could still pick her up at that other bus stop, but my friend is no longer there. And while I have plenty of friends in that neighborhood I could call in a jam, the thought of me not being able to get there and her  being alone in another neighborhood just makes me sick to my stomach.

As of right now I have her coming to our neighborhood tomorrow, but I am tempted to send her with a note to change it and just do the pick up line.

Thanks, I read everyone’s comments and decided to go with the pick up line yesterday. And it SUCKED!  I sat in the pick up line at least 30 minutes after seeing the five-minute bus go by. So, by the time I got my daughter, she was really irritated.

She was frustrated, and I was frustrated. In the end, the best course of action for the time being is, in fact, the short bus ride (not the short bus). I am planning to do that for a while until people get established in carpools and the pick up line calms down. Then I will likely switch over to the pick-up line. So, I am taking your advice, just not yet. Thanks for your input, Girls!

Are You a Happy Mom?
Are You Strict Enough? How Do You Define Successful Kids?
Smackless Smackdown: Find Their Kryptonite and Wield Its Power!

riding the bus, when should kids ride the bus

← Thumb-Suckers and Nail-Biters and Germs, Oh My!
Why I Laughed All The Way Home From the Store →

11 Responses to The Bus Freaks Me Out