Why I Laughed All The Way Home From the Store

By Heather on in Humor

So, as usual, I am on the better-late-than-never plan. School had already started when I got around to doing a little back-to-school shopping for my daughter (6). Everything at the store was picked over, but I was happy that I didn’t have any lines to contend with. Actually, I was just happy to be out and about by myself.

After getting a few things, I decided to make one more stop at another clothing store. Nada. So I headed out to the car empty-handed. I had intentionally parked away from other cars because someone hit my car not too long ago, and ever since that incident, my car has been getting little dings left and right that…

The damage from the accident isn’t too bad, but thanks to a huge hail storm in April that pelted thousands of cars in town, my car isn’t scheduled to be repaired for a few more weeks.

Anyway, I walked up to my car in the parking lot and low and behold there was a new dent — one I’d never seen before. Craaaaaaap! After a few more choice words in my head, I began to investigate it. Maybe there’s just something on there. I started to scrape at it with my fingernail thinking Please, be poop. Please be poop! (To be clear, I mean bird poop.) I stopped scraping it because I didn’t want to make it worse. Instead I started using my shirt in an attempt to shine it up. Um, no luck. It was chipped paint.

Well, this sucks! I thought, shaking my head in defeat. Time to go home.

After fumbling around in my garbage can of a purse for my keys, I grabbed them, clicked the button and then…silence.  Nothing happened. That’s when I realized it was…

D’oh! So, pretty much I cursed, prayed a bird pooped on and then spit-shined someone else’s Honda.  But I got to laugh all the way home. 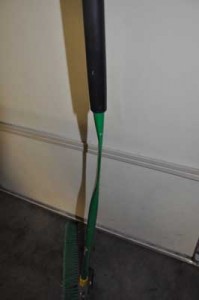 Annnnnnnd, since my idiocy knows no bounds, there’s a little more.  When I got home and pulled into the garage, I accidentally ran over the broom and smashed the handle. Guess I won’t be taking my Nimbus 2000 out for a spin anytime soon!

Other Random Acts of Stupidity