By Heather on in Fun Mommy, Um, who am I again? 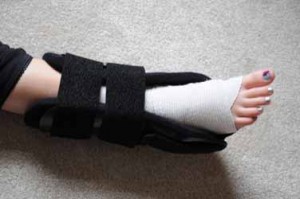 Alright, I caved. Getting into the trampoline, I started to chase my kids around in circles making them scream and run. “Double-bounce me and make me fall down,” my seven year old said. “Pleeeease!” she begged. Cool mom that I wanna be, I double bounced her and made her fall. Only she landed funny and sprained her ankle. Oops.

Of course this happens a whole two hours before my husband leaves for a business trip.  Nice. Well, it was totally my fault.

There’s so much going on right now. Deadlines and Christmas and a house that seems to explode with a mess every time I manage to pick up a room. I was kind of disappointed that my daughter couldn’t go to school, because I needed the time to get things done.

But then something happened. My friends in Atlanta were talking on Facebook about a missing seven-year-old girl that had been found in a dumpster near her family’s home. I found the story online. It has since made the national news.  Oh, you guys it is just heart-breaking.

I thought about it a lot. Especially the mother and what she wouldn’t give for some unexpected time with her seven-year-old daughter.

I totally checked myself, and instead of plopping my girl in front of the TV so I could catch up on the work I had planned to do, I treated it like the gift it was.

We took Charlie to preschool and had a mother-daughter day. I took her out to breakfast. Where? Where else would you take a kid with a bum leg — iHop! Then we went to one of those places where you paint pottery and followed it up with a not-so-healthy lunch of popcorn and candy at the movies. We saw The Muppet Movie a second time, it’s SO good.

It was pouring outside, but we went anyway. I used an old umbrella stroller to move her around.  Add in a couple of coats, a purse, a golf umbrella, popcorn and drinks and we were a hot mess coming through. Especially since one of the wheels of the stroller was slightly mangled – no doubt I ran over it with the car at some point.

We had so much fun, and I was glad I pushed everything (that doesn’t really matter anyway) aside to have fun with my girl.

A lot of things I spend my time on aren’t very important.  I’m grateful my focus was redirected, but super sad and still thinking about the little girl and her family in Atlanta. My friend, Melissa Cox from Frugalissa Finds said something to me in an email last night about being intentional with your kids. She had no idea what I had been thinking about so the timing of her comment was excellent because I didn’t have a good way to describe it until she put it that way. My sister Amy is really good about doing “dates” with her kids. So is my friend, Megan. I think I need to stay focused on that and make sure it happens intentionally, and not when it’s prompted by a double-bounce gone awry.

Are you good about spending one-on-one time with your kids? What kinds of things do you guys like to do together, I would love some ideas.

The Volunteer State: I Miss My Paycheck
Can You Guess What We Were Doing?
Chalking It Up To Paint
← Egg and Sausage Breakfast Casserole Recipe (Mmmmmmm)
A Message From Santa →

7 Responses to “Hey, Mom! Double-Bounce Me!”