The Grinch Bowl – And a Major Award

By Heather on in Fun Mommy 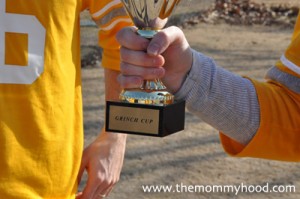 New year’s eve was the day of our 3rd annual Grinch Bowl – a flag football match between a bunch of really fun (and funny) people that takes place in Atlanta.

Even I play. And to be clear, my athletic abilities range from stepping in holes and rolling down hills to tripping over laundry baskets in the upstairs hallway. In addition to having all that going for me, I can’t actually throw (or catch) a ball.  So, while the the teams are divided in advance, I have no doubt I am one of the last to be placed on a team. I’m filler.  But that’s okay, I  totally own my inability to run without falling down catlike prowess and show up eager to play to the best of my abilities.

But this year, something new happened.  I was like Popeye with a can of spinach in the belly! I could throw, I could catch, and I even played a respectable defense! It was a New Years Eve miracle of epic proportions!  If someone ran by me with the ball, I would experience this karate-like “hiyah!” in my head and before I knew it I was taking not one but TWO flags off  my opponent. (And nearly their pants!)  Then I felt compelled to perform a victory dance, whipping them around like flag football nunchucks. At one point, I even fantasized about doing a Zorro like H with them to render my teammates and opponents alike shocked by my awesomeness.

Okay, so perhaps what happened in my head isn’t exactly what happened on the field, but I did manage to hold my own and contribute more than anyone (especially me) thought was possible. And for that I was awarded MVP. It’s a votive candle version of the leg lamp from A Christmas Story, and I am totally proud of it. After all, it is a major award. They said it wasn’t a sympathy vote either, and I almost believe them. Almost. 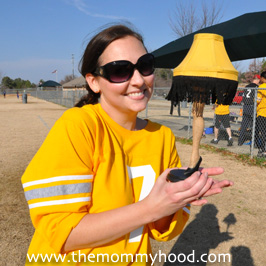 They even carried me off the field took my picture with the leg lamp.

Now I am just sore as all get out. In fact, I just reached for the mouse at my computer and it hurt. Oh, hello there, under-appreciated muscle-group. While my body just hurts, my heart is happy. Goodtimes with good friends once again!

BIG shout-out to Rick for organizing everything and to everyone who participated in or supported the mighty Grinch Bowl.

3 Responses to The Grinch Bowl – And a Major Award