The YMCA Flash Mob in My Mind

By Heather on in Humor, Wellness

I have a love/hate relationship with the gym. Hate to go/love it when it’s over. Maybe one day that will change. Oh, who am I kidding? Pass the chocolate-covered potato chips and let me tell you what went down at the gym the other day.

When I got to the gym, I circled the lot looking for the closest parking spot…I know, People, but it was kind of rainy. LIAR! It was a gorgeous day!

My iPod had been left on by one of the kids, so it was dead. I decided to just take my headphones in so I could plug them into an elliptical machine with a TV. And what did I watch? The Food Network. You know, plotting the demise of whatever calories I might burn.

Then they started making some healthy food, and I quickly lost interest. Surfing the channels, I stumbled upon a blank channel that had music – good music. I liked it, so I tuned in and picked up the pace a little.

I was trucking along nicely when I heard it…the total 80s classic called “I Wanna Rock” by Twisted Sister. My wacky brain went to work entertaining me while I endured the exercise.

Okay, now play this as you read the next part.

(When you listen to “I Wanna Rock” the crowd yells “Rock!” or “No!”when led by the main singer. Note part of the song highlighted in red in the lyrics below).

All of a sudden I saw everyone at the gym throw of a fist in the air in unison to punctuate the song which started the YMCA fantasy flash mob in my mind. 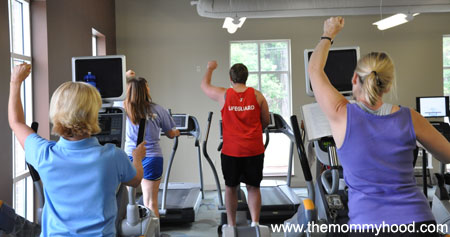 Next, a guitar solo in the song. Moms and gray-haired people alike hopped off their machines to rock it out on air (or plastic) guitar! 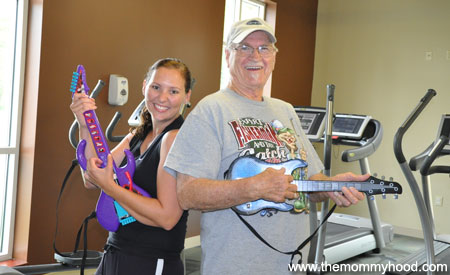 Here’s the crazy part. I was so entertained by my fantasy flash mob that I went back the next day and convinced total strangers to pose for these pictures. Big shout out (and fist in the air) to Colin, Andrea, Jackie, Donna and Roy! Thanks for helping me, you guys ROCK!

So next time you are at the gym, I totally recommend imagining everyone is dancing to the music in your ears. And if you have a playlist, you should really put a little Twisted Sister on it!

Have a great week!
Heather

Shouldn't We All?
Reminders from Toys...
Great TV Show for Young Readers
← Tip for Keeping a Cast Dry During Bathtime
Motherhood Moments: There Are Hardly Words →

4 Responses to The YMCA Flash Mob in My Mind