By Heather on in Humor, Sanity

Disclaimer: Everyone will sound like a complete turd by the end of this story, but don’t judge us. I promise, we are actually good people.

My husband was away on a weekend business trip at a luxury resort while I was treated to an EXTRA helping of “quality” time with the kids.

I have fallen off the soda wagon so many times (I am pretty much out of excuses).

We were headed to my nephew’s 2-year-old birthday party and I failed to stop for some much-needed soda.

By the end of the party, I found my eyes wandering over to the liquor bottles on the shelf in the basement.  Mostly, I just sat there trying not to make the sounds Goldie Hawn makes when she loses it in the movie Overboard, “Buh, buh, buh…”

It was time to leave the party. We were originally planning to go over to my mom’s to have takeout, but then I realized it was getting late and we had better head home.

Cue the six-year-old’s crying fit. My sweet, calm little girl who pretty much always keeps her cool had a nuclear meltdown. During her fit she even used the word, “LOSER!”  She called me a loser! I didn’t even know she knew that word. She said she heard it on the bus.

I stopped at Chick-fil-A to pick up some dinner. Since it was too late to drink caffeine, I decided to treat myself to a milkshake. This is a once-in-a-long-while kind of thing. I’d earned it, right?

We get home and it’s not going well. No one really eats dinner (including me). I sighed and stuck the milkshake in the fridge hoping I would get to it eventually and put the kids to bed.

Rather than work, I decided I would watch the Meg Ryan movie French Kiss. I had been thinking about all week after mentioning it in my blog post Why I Laughed All the Way Home from the Store.

Of course I couldn’t find it. After an hour of searching, I finally pushed play and went to get the milkshake of joy and splendor from the refrigerator.

I got over to the chair where I was going to sit when the milkshake slipped through my fingers and fell to the floor in slow motion “Noooooooooooo-ho-ho!”

My lower lip protruded as I surveyed the damage. 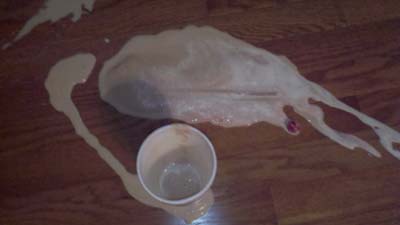 There was milkshake all over the left leg of my mompants. So what do I do? I rolled that pant leg up and got some paper towels.

Then, a teeny tiny ray of sunshine…

I noticed there was about an inch of milkshake miraculously left in the cup! I look at it like a fat kid looks at cake, and then picked it up with the intention of savoring this precious gift from the Spilled-Milkshake Gods.

But before the Hallelujah Chorus could even start, it all went wrong. So wrong. Turns out the bottom of the cup was busted. So as I was trying to drink what’s left it was actually falling out of the bottom – splattering all over the floor (and onto my one bare leg and now the other leg of my mompants).

My daughter came down to see what all the commotion was about. I sent her back up to bed and cleaned it up.

I decided instead to have popcorn and whine wine. It wasn’t cutting it. So I scrounged around in the freezer and found a small ice cream bar. I sat down in my chair, pushed play on the movie and was about to take a bite when…“Wahhhhh!”

There was faint sound from upstairs. I pause the movie. Wait. Hope. Pray.

No such luck. Here comes my daughter to state the obvious and boss me around. “Charlie is crying, you should go up there right now,” she said like the adult and not the child.

I stopped the movie, dumped the uneaten ice cream bar in the bowl of disappointing popcorn, and went to my son’s room.

He is overtired and inconsolable.

I did not have the capacity to deal with this. At one point during the fit he asked for a drink. I made the mistake of asking whether he wanted water or milk. “I want juice, you idiot!” he said, crying uncontrollably.

Seriously? Where did he learn THAT?!?! That was a new one. What a night!

Cue the Vivaldi. Meanwhile, my husband is at a posh dinner event overlooking the gardens of the Biltmore when his phone rings….Brrrring brrrring!

The Vivaldi screeched to a halt.

Back to the house of the crying son – Charlie eventually calms down. Then it was almost like he had no recollection of the fit. He was acting totally normal. He climbed out of his bed, took my hand and walked me down the hall sweetly saying, “I’m going to stay up as long as you do…”

I gave up. I put him in my bed and read my book (The Help – it’s awesome) while he went to sleep.

I was so wigged out by the craziest day on record in while that I couldn’t sleep. I got up and worked on the computer from 1 am until 3 am at which point Charlie came in to get me.

Leading me back to my bed by the hand he chastised, “You shouldn’t leave your kids all alone like that.”

The hubs got his butt up super early and got home before the kids woke up. He’s a smart man.

New Orleans Getaway Part III: Dear Kids, Do As I Say - Not As I Do
This week at The Barbie House...
The Barbie House: Art Imitating Life
← Tech Tuesday: How to Stay Organized with Evernote
Raindrops Keep Fall’n on My Head →

21 Responses to Milkshakes, Losers and Idiots

Leave a Reply to Megan Click here to cancel reply.